T&D’s Cats of the World Field Notes and Photos

I arrived to what I thought would be a parking lot with a huge gate and an enormous entrance, but turned out to be a gravel parking lot with picnic tables outside the small entrance, and no huge gate blocking the premises. As I got out of the car, I was greeted by Jennifer Mattive who was leaning on the porch of the entrance to T&D’s Cat’s of the World in order to stay out of the bright sun. She waved at me as I took out my camera equipment and made my toward the picnic tables on the left hand side of the small entrance. As I placed my equipment on the picnic table and began to set up my camera equipment, I introduced myself to Jennifer who wanted to get an overview of what my project was about and what I wanted to see exactly. 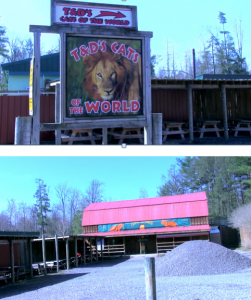 After I set up my camera, she told me she would take me on a short docent-led tour of the premises. The entire tour was on level gravel rails and was an enjoyable, informative and exciting experience.

As I enter the entrance, I enter this small wooden shed with fakes leaves and vines hanging all over the ceiling. Bumper stickers align the entire wall with sayings that are completely irrelevant to animals and T&D’s Cats which really stuns me. There are a lot of bumper stickers that have to do with wives and husbands as well as children. The ceiling contains a lot of posters of insects such as butterflies and the different types of species. There is a small counter on the left hand side when you walk in which is were Jennifer probably works at the beginning and end of her tour, and on the right hand side are all the items of the gift shop. Apparently, the beginning and end of the tour Jennifer typically gives clients is in the gift shop where they sell small books, small stuffed animals, awareness pamphlets, posters and pictures.

The minute we step out the back door of the small wooden gift shop, tall cages surround us. As we make our way to the left, Jennifer tells me that all these tall cages contain many different types of monkeys. She tells me that many of these monkeys used to be domesticated pets. People would be in search of a companion, perhaps someone else to keep them company, so would buy these monkeys and raise them as children to keep them company. A lot of these people would go as far as keeping a diaper on the monkey at all times and dressing them up with coats, jackets, and even hats! I was totally baffled by this idea. I mean, I could see how people might want to fill an emotional by buying a monkey, but dressing them up as humans and treating them as humans seemed very odd and extreme to me. As soon as I had entered T&D’s Cats Jennifer’s stories had already intrigued me to want to know and explore more. 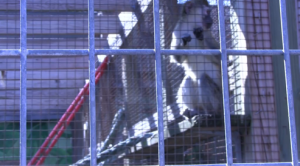 As we walked past all the cages with monkeys screaming very loudly, I couldn’t help but notice how all the cute animals were trying to grab my attention. Every time I would walk past a cage an animal would run up against the cage and start swinging or banging on the bars to get my attention. It was almost as if they had human emotional needs and qualities. Maybe because they were domesticated this influenced their emotional needs and traits? I was eager to see more.

Jennifer proceeded to inform me that this was the first nice day all year, so it was the first time a lot of these animals were finally out of their dens. One of the main reasons why they were all so jumpy and excited was because of the gorgeous weather and of course, my presence, which they sensed.

The tall almost skyscraper-like monkey cages that engulfed me in this maze came to an abrupt halt, as the gravel road became an open forest. Ahead you could begin to see the larger plots of land with wider thicker fences. I got the feeling we were approaching the larger animals. As we began to walk into the open land plot on the gravel road I came across emus, foxes and a couple of tigers walking across the fence following our path. The collection of homeless animals included lions, tigers, bears, wolves, otters, monkeys, parrots, and emus. Uncommon animals I saw included the Pantagonian Mara, a large rabbit-like creature from Argentina, and a Binturong, Bear Cat, from Asia. As we walked by the Binturong, she stopped me and told me to try and notice the smell of the Binturong. It had a long-thick tail, was climbing trees, and looked like a friendly and gently wolverine. I told her the Binturong smelled like buttered popcorn, which was exactly what the animal was famous for – its smell of buttered popcorn! 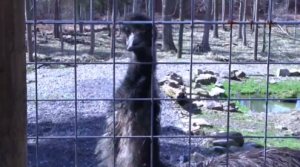 As we proceeded, we stopped in front of the wolves cages, Jennifer went on to explain that T&D’s Cats has attracted black vultures as well that are not confined. There was an eye-popping moment as a black vulture descended into the wolf pen to tease the small wolf but flew away as soon as the wolf pound upon it. At that moment, I was fortunate enough to witness the wolves howling in synch with one another from different pens. It was a marvelous moment. I couldn’t help but be completely intrigued by these animals. Why were they howling? Were they howling because they sensed my presence and were warning the others? Did they feel I was a threat? Did they think they were in danger? Did I have nothing to do with their howling? Once the magnificent moment was over, Jennifer proceeded to explain that like most animals, many of the wolves were adopted as small cuddly wolves that looked like dogs that were easy to handle. But as they grew older, owners came to realize that they could not longer handle these animals and had to give them away. A lot of these animals she told me were also used in movies. Once, the movie ended and the wolf had no use, it was either put down or sent to a zoo or shelter. After a silent pause and a couple of seconds of admiring the wolves, Jennifer proceeded to push me along to the tigers.

As we were walking, she pulls a twig out of her rain-soaked brown ponytail. Even though it is only noontime, she has already put in a long day of work cleaning out cages. When we arrived in front of the tiger den, I saw a tub of water was provided to two of the tigers that previously did not have one and the tub was used frequently. The animals appeared to look forward to the keeper filling the tub with fresh water and would play in the stream of water. Some of the larger tigers looked as playful as kittens! She proceeded to tell me more stories on these three tigers and how they were used as photo babies. Once they turned 5 months old, they would not be allowed to be used as photo babies anymore so either had to be put down or sent away. T&D’s offered to take them, and even though T&D’s has 16 tigers, she told me they are very expensive to maintain. T&D’s ask local farmers to donate large animals that have died and ask the game commission and highway departments to bring in fresh road kill and for butcher shops to donate scraps. Lions and tigers eat 30 to 40 pounds of food a day and in order to maintain good animal health, these meat-eaters must be fed bones as well. 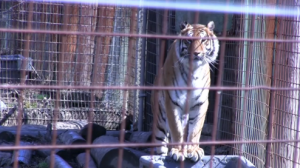 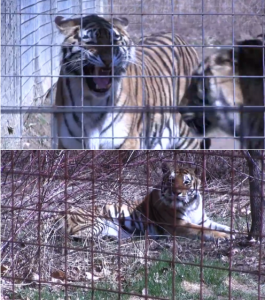 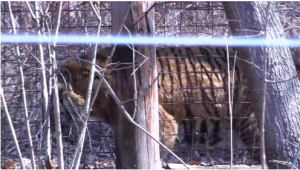 After the tigers, we walked for another five minutes to a more distant cage, where Jennifer made me meet Buggy. Buggy is a young, black leopard who was neglected by his owner after his days of stardom in movies and commercials ended. He only was used to make money and was given very little attention. Jennifer told me that Buggy was very skittish and fearful of people when first brought to T&D’s. However, time and kindness by the Mattive family has restored his faith and confidence in some people. Apparently, Buggy is calm and content here and he seemed to be calm and content to me as well, but his fear of humans still remains. Is that why his cage is so far from human contact, unlike the other cages? 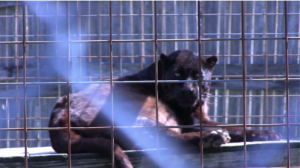 All the big cats were found in the same area because that is were the biggest plot of land was. After the panthers, Jennifer showed me the lions. She told me the story of one long-suffering animal, Rayden, a lion from Ohio, was only fed hamburger and acquired a calcium deficiency. At only two years old, his bones are deformed, causing him to hung over when he walks. He is unable to stand up straight. He sometimes socializes with the other cats for short periods of time, but mostly he is happiest living alone. 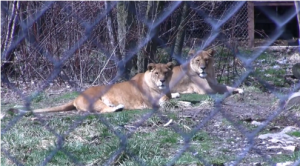 Lastly, as we got towards the end of the tour after an hour and a half, the closest cage to the exist, right in front of the panthers, right before entering into the monkey cages skyscraper-like maze, was Sheena’s. Sheena, a male Siberian Tiger, was brought to the refuge by a zoo that didn’t want him when he was only four days old. Jennifer told me that Sheena could not be returned back to the wild because they don’t know how to hunt. Most of their parents were born in captivity, so there was no role model for them to learn the ways of the wild for themselves. White Siberian’s are all artificially bred, so Jennifer taught me that they are not made to survive in the wild because they can’t camouflage themselves. Furthermore, because they are artificially bred they are born with a different mind and genes, which causes them to be slower, more lethargic and have different mental processes then other regular tigers.

As Jennifer escorted me back to the wooden entrance so she could continue her day feeding the animals she told me that the reason she told me each animals story is because although each is different, they send the same message: Do not get wild animals as a pet. That is the message Jennifer told me she was trying to send to people through their tours.

As I thanked her again for her time and consideration she asked me to send her the video so she could post it on her website, and spread the word to as many people on campus as possible about volunteering for T&D’s Cats. They are always in need of volunteers and donations. As I got in my car to drive back on this beautiful sunny day, I couldn’t wait to go back another time and see if any new animals would be back or if people would finally, one day, get the message across – Wild animals should not be kept as pets.

This entry was posted in Uncategorized. Bookmark the permalink.