The location I visited for my ethnographic study was the Brumbach’s Auction in Sunsbury, Pennsylvania on the evening of Friday 24th January 2014. The auction started at 5pm (further information available at: http://www.auctionzip.com/PA-Auctioneers/24993.html ).

I shall relate my experience of this unfamiliar setting and event in a structured way:
– Description of the physical exterior setting.
– Our arrival and its effect.
– The interior organization.
– The atmosphere.
– The people and relationships I observed and their reasons for attending the auction.

This event was new to me; it involved activities, norms, practices and skills that I had not previously encountered. Throughout this account, I will also explain what I had expected and the ways the actual experience was conform to this and the ways it contrasted from the situation I had anticipated encountering. I will pay special attention to the two elements of the experience that particularly caught my attention: the social status awarded to the auctioneer and the relaxed, laid-back atmosphere. I will attempt to find plausible explanations for what I experienced.

I must also note that being uncertain of what to expect I was not sufficiently prepared to take good notes in the field, so certain details (prices, the number of people) are approximations. The next time I visit the auction with the goal of an ethnographic study in mind I will bear this in mind and take more notes at the time. 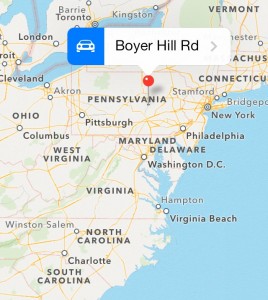 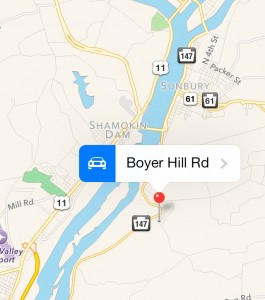 The location of the auction was very remote. It was situated in a run-down barn surrounded by fields with a few houses built nearby. From the outside the barn, there were no signs of activity and I would have thought it abandoned if it had not been for the cars parked alongside it. It was quite old and weather-worn, the windows were covered up and it looked like its primary purpose would be storage. There was a small sign on the front of the building saying “Brumbach’s Auction” which was the only indication we were in the right place. There had been no other signs along the way to mark its location, from this we could deduce the people in attendance had not happened upon the auction haphazardly, but that they must have already known about its existence (whether they had searched for it online, or had been coming for years).

When we got out the car, the entrance was not obvious. Fortunately, another man had pulled up before us and we saw him enter the building through a non-descript side-door so we followed him inside. This, coupled with the lack of signposting along the way, gave off the impression that newcomers would not be particularly welcome, as though this group had already formed a tight-knit membership and was not looking for strangers to join unless expressly invited by  a current member.
Walking in to the room was mildly intimidating as the entrance is situated at the front of the room so all attendees could see who had entered.
We (three female university students) did not fit in with the usual crowd and we did not blend in due to multiple factors. After the initial surprise of the attendees that we were in attendance, most turned their attention away from us, however a few people (in particular one woman, approximately in her seventies) continued to stare. Our presence did not seem to effect the normal progression of the events of the auction.

The interior organization of the auction was not what I had expected. It was arranged in a way that reminded me of a classroom with benches and desks for the students (bidders) and a desk at the front for the teacher (auctioneer).
More specifically, the layout of the room was clearly centered around the auctioneer’s desk, which was set up on a small stage, like a pedestal, at the front. At this desk, the auctioneer sat on the right, with a microphone, and to his left sat a woman who appeared to be taking notes using a piece of paper, a calculator and a very old computer (probably about 10-15 years old).
To the left of the entrance door was a desk: this is where the man handing out bidding cards sat, well-placed to help people upon their arrival. When we entered he was eating food.
On the right side of the entry door were two lines of tables, displaying the items up for auction. It was between the auctioneer’s desk and the entrance door, presumably so people could browse the items before taking a seat and so they would be easy to access when people began bidding on them. Surprisingly, on the tables were many store branded items, like laundry detergent, in large quantities.
At the far end of the room was a food counter (mentioned on the auctionzip website), with a kitchen behind it. It sold fried foods and other easy-to-cook, quick meals. Serving customers was a woman, and from what I could see, in the kitchen men were preparing the food. In front of the counter, there was a small huddle of three women chatting. This encouraged the idea of the auction being not only a functional event, but also a social event.
To the right of this counter, there was a table where the perishable goods up for auction were being kept. Vegetables and fruit were in cardboard and wooden boxes, and plastic bags. Around 4 men stood near this table, they had brought the fruit and vegetables to sell. They carried the goods to the front (between the auctioneers desk and the benches) to prove the quality of the goods and then gave them directly to the people who had bid on them, so the bidders were not required to move.
To the right of this was a table for selling baked goods, manned by an Amish woman who lived “just over the hill” and came weekly to the auction to sell her baked goods and bid on fruit and vegetables.
In the middle of this space, were approximately 12 long wooden benches and desks for bidders to sit at. The intention of those who organized the space must have been to use the edges of the room for secondary elements of the auction in order to maximize the number of people they were able to fit into the primary-bidding space in the center. This would also explain the use of benches as opposed to individual chairs as it allows for the fluctuation in the number of attendees. On the day of our visit, I would say there had been around 30 bidders. We see here that the environment has a strong influence over the atmosphere. It is my opinion that this arrangement also enabled a sort of ‘sheep effect’. Once one bidder had received their goods it confirmed the value of the produce and so others felt more comfortable following suit.
I have also drawn a schematic map of the interior to help visualize the space. The pink circles are people. 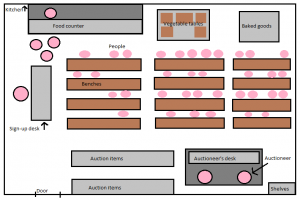 The atmosphere was one of the most surprising elements for me. I had expected to find a similar setting to the Wall Street stock exchange or that seen in the film ‘A Country Auction: The Paul v. Leitzel Estate Sale’. I did not expect this auction to be similar to the stock exchange in terms of technology or the number of people, but I had expected to feel a similar buzz of activity, anticipation and competition [see video 1]. What I found was quite the opposite: it was relaxed, calm, laid-back and friendly with a clear feeling of community, like when a cowboy walks into a saloon bar in an old western movie (but without the fighting) [see video 2]. This feeling was expressed through the relationships of familiarity the bidders seemed to have with one another and the non-aggressive bidding style.

Most attendees were eating (it was dinner time, 5pm), so this event became in a way like a community meal where people could catch up with the events and gossip of the week. It even seemed that in the time I was there some people did not place any bids, this led me to wonder whether their primary purpose for attending was to bid, or simply to attend a social event and interact with other members of their community.
Upon reflection, I believe my expectations were based upon dramatized media representations of similar, but larger-scale events. I had not gauged my expectations relative to the size of the actual town and its remote location. I also noticed that through representations of people living in small-towns in rural areas I had internalized through socialization and media representations, I was expecting to find a certain ‘type’ of person attending. This expectation was confirmed in certain ways and contrasted in others. 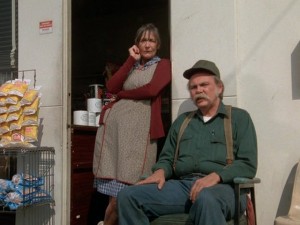 PEOPLE, RELATIONSHIPS AND REASONS FOR ATTENDANCE

There were approximately 30 bidders in attendance at the auction, one auctioneer, 4 kitchen staff and 4 vegetable sellers. The age would probably have been around 50 years old on average for most attendees, but the fruit and vegetable sellers were all male and probably in their late-20s/early-30s.
What I found most surprising was the number of bidders who attended the auction as (married) couples. There did not seem to be a particular gender that was more present than another. I had expected to find more men than women, but I suppose the nature of this auction as a vegetable auction, rather than a livestock auction, might be more likely to attract an equal number of both genders. Vegetables are used for cooking; this is typically assumed to be a gendered-activity that women perform more often than men, which could explain the presence of so many women.
I observed that most attendees did not appear very physically fit and I would say most were overweight, this may be due to their age.
They all engaged with one another in a friendly-manner, with familiar conversations and jokes. My attention in particular was drawn towards the auctioneer and his relationship with the bidders. His physical position sitting behind a desk on the stage with a microphone was symbolic of his position: he was in charge and seemed to have the most authority in the room. He seemed to transition from his role as an auctioneer to an ordinary member of the community frequently. When he was in ‘auctioneer mode’, he used a particular vocabulary (that I could not understand), tone and style of speaking. This was in complete contrast to his role as ‘ordinary community member’, which allowed him to give his personal opinions on the items up for auction and chat to bidders he was familiar with. Sometimes these roles overlapped, demonstrated when he tested the fruits on auction and offered bits to bidders as proof of the quality, as well as when he compared the prices of the winning bid to the store prices in chains such as Walmart (“you don’t get prices like that at Walmart”).
Different people had various reasons for attending. From the people I spoke with I was given insight into a few. One woman had been coming for several years, so she continued to attend mainly out of habit. Another woman (who sold the baked goods) attended to earn part of her livelihood and also to purchase fruit and vegetables. Though I did talk to anyone to confirm this, it seemed that most people chose to attend the auction rather than go to the supermarket because of the low-prices rather than for the quality of the goods up for auction.

Overall, I found this experience rather interesting, it definitely gave me an insight into what it might be like to live in a small town in a rural area.