I decided to post a series of photographs that demonstrated the breadth and variety of items that the Brumbach Auction sold. 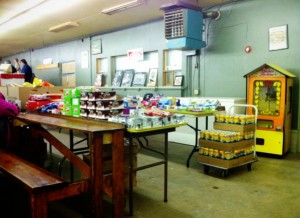 The nonperishable items were shown in bulk in the front of the auction for all the bidders to see. They were stacked in piles so the bidders had an idea of what type and how much merchandise was available to the public. It was also the cheapest stuff available, so by putting them in front of the bidders, they were more likely to purchase the items because of the subliminal messages the auctioneer was trying to send out to the bidders. 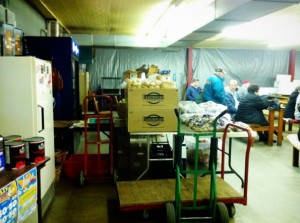 The produce, or perishable items, were located at the back of the auction behind a table and in a storage area in a separate room behind the table. They were out of the sight of the bidders until the auctioneer was ready to bid on the item. I suppose these were the most sought out items, and in order to have the bidders bid at higher prices, it was important for the auctioneer not to expose the amount and type of produce that was available beforehand. This way, by blinding the public to the produce that was available, they would be more likely to bid at higher prices not knowing that there was more produce in the back. 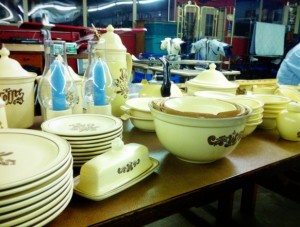 Along with perishable and non-perishable items, the auction sold pots, pans, blenders, cookbooks, and kitchen sets as well. This kitchen set was found on the right side on a table immediately when one walked into the auction. The kitchen set had its own long wooden table dedicated to it, unlike the other items, which in my opinion demonstrated the higher value of that particular item. By placing it in such a visible area, I’m assuming it was one of its biggest bidding items that night. The impact of seeing such a big set the moment one walks in gives bidders something to look forward and think about throughout the auction. 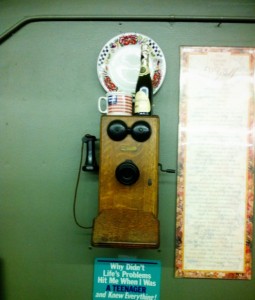 At the back of the auction, hung up on the left hand side next to the bathrooms is this vintage telephone. I think it is trying to represent how all the items within the auction not only have a history behind them as well, but they also are of value to someone somewhere and are each hand picked for specific reasons. It basically is a symbol of what the auction has to offer. Authentic, vintage, meaningful items that act as memorabilia for those who are nostalgic of the past or want to relive a moment and memory. 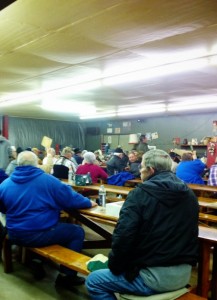 An auction demonstrates how people in their daily lives give meaning to their world by assigning specific values to specific items. It also shows how these people manage to allocate these items among themselves in a manner that is generally acceptable to all. 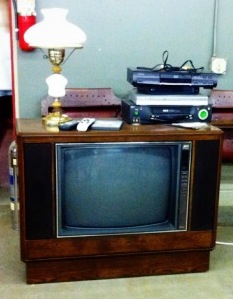 Again, for those who do not want to adjust to this modern day and age, vintage TVS, the first ones they used to watch TV shows on are still available. Relive your past or escape from the present – by purchasing this TV one can utilize it as a means of reminiscence.