This Friday 31st of January 2014 I went back to the Brumbach Auction in Sunsbury to take some photographs to help illustrate the previous assignment describing the environment at the auction. Overall, I have chosen seven photographs separated into five categories. The five categories are:
– Exterior setting
– Auction as social event
– Auctioneer and displaying objects
– Organisation of people and bidding
– Items for auction 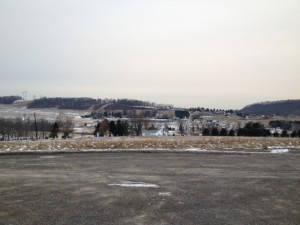 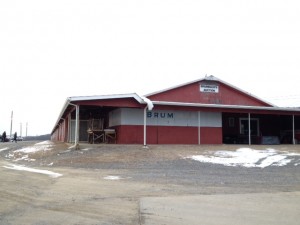 These images of the outside of Brumbach’s Auctions help to display how remote the setting is. The red barn is clearly quite old. The sign on the building is quite small, so it is understandable that if you were not aware of its location you might not notice that the auction was found here. The field and surroundings demonstrate how physically isolated the auction is. As I noticed on my first visit, if the weather is particularly bad (for example snow), then the auction may become very difficult to access, which would explain why only the locals and regulars are members of this group. This seemed to be confirmed by the fact that more people were in attendance this week (01/31/2014 approx. 30 people) than last week (01/24/2014 approx. 50 people) when there was more snow and ice on the ground. 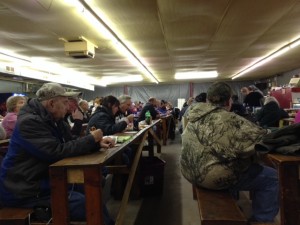 The auction is a social event, not solely organized for trade and commercial purposes. This environment is arranged to prioritise the main purpose (the auction and bidding), but also to facilitate social interaction. At the front of the room is where the auctioneer sits, but at the back of the room, the first place you see upon entering the room, is the food counter. It is logical to assume that this arrangement leads people to (1-red) order food upon arrival, (2-orange) find a seat, (3-yellow) return to counter to pick up food, (4-green) then sit back down and join in the bidding. The benches, rather than individual chairs, not only allow for a fluctuating number of attendees, but also encourage interaction amongst them by forcing them to sit close together. The desks also provide a surface upon which people can place their food, so this environment is also similar to a restaurant. 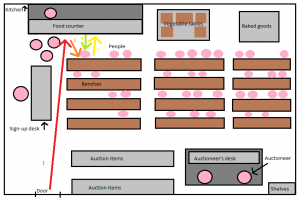 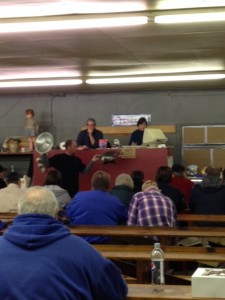 As shown here, the auctioneer sits on a stage, behind a desk at the front of the room. This helps to illustrate the teacher-student relationship I mentioned in my first field notes, as all the bidders actions are centered towards the auctioneer. The computer on the desk that the woman is putting notes into is clearly not a recent model, much like the rest of the furniture and decorations it is at least 10 to 20 years old. The man standing in front of the desk, between the auctioneer and the bidders, is holding up a kitchen appliance (some sort of pan) to show that it is in good condition before bidders start placing bids. Symbolically, as well as physically, the item up for bid is in a transition stage between being examined by the auctioneer and being purchased by one of the bidders. 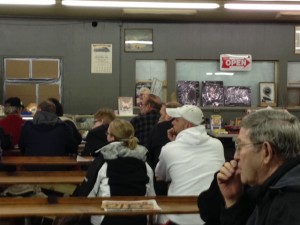 I chose this image to demonstrate how people bid and also to show how people organize the way they sit. It is easy to observe that most the people in this image have grey hair, and two of the men are balding. Clearly, four of these attendees are actually seated as two pairs, as two couples. The man in the white cap and the blonde woman in the black coat are sitting close together, as are the balding man in the check shirt and the red-headed woman with glasses and black jacket. We can deduce that this event is not something that people attend only as individuals, but also as couples, thus reinforcing the idea that this is a social event. 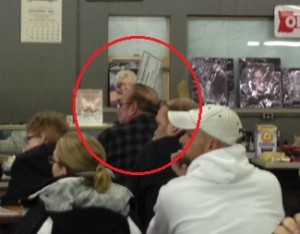 The other key element of this photograph is the man bidding. The man in the check shirt is holding up a bidding card, his actions were minimal, if I had not been watching closely I would probably not have noticed the slight movements of his hand and by extension of his card. The man who was bidding against him simply nodded his head, so I chose not to photograph him because it was difficult to prove that he was bidding in a static image. In order to recognize the meanings behind these small gestures, the auctioneer must understand the codes and conventions of the activity (bidding). 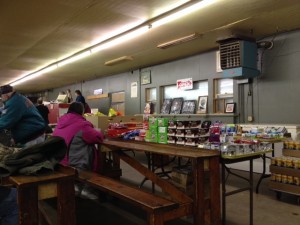 As demonstrated by this photograph, the items up for auction are laid out in two rows to for attendees to look at before the auction starts. We can also see that these items are branded items, presumably they were purchased cheaply in bulk so they could be resold at the auction. This proves that the people attending the auction are not necessarily attracted to the auction due to the quality of the items on sale, but thanks to the low prices.